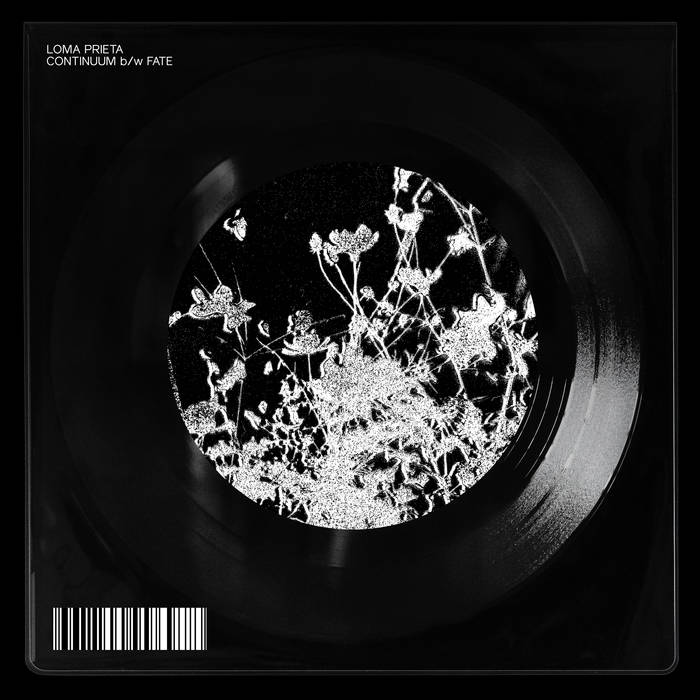 "Continuum b/w Fate" is a new two song single from Loma Prieta, recorded by engineer Jack Shirley (Deafheaven, Oathbreaker). A-side "Continuum" is artistic editorial in the self-damning that many face on a day to day basis. Playing as an examination of the perpetual motion that contemporary society demands of each one of us. Musically it glides infectiously with new depth and fuzzed out control. B-side "Fate" uses Pixies-esque lightness to veil the weight of its message before erupting into musical chaos. Here they disguise disgust with melody while singing "Drugs and God the same distractions / Lay on the dirty floor and stare at the ceiling, like it was a planetarium dome". Expanding their unmistakeable screamo approach into powerful Fugazi-like territory.

Formed in 2005, Loma Prieta have been a mainstay of the Bay Area hardcore community for more than half a decade. In that time they have released four 12 inch records and two 7 inch records mostly on their own label, Discos Huelga. They have also toured the U.S., Japan, Canada, and Mexico numerous times, all while members play in several other hardcore bands. ... more

Track Name: Continuum
Every day is so surreal
I'm going to work
And I'm calling out sick.
I can't get out of my fucking head
I guess all the drug abuse isn't a real
Attempt now is it?

Hiding on the nighttime side of earth
Never touched by sunlight
They're tracking my phone,
They're keeping the minutes
At least I know I'll never be alone.

I can feel my heart breaking every night
Monopoly dollar
Treet trunk painted white
I took a loss
They're keeping the minutes
They'll coax you back
The one dollar bills smell different.

Can't drink poison
And expect someone else to die
I'm calling out sick
I'm a body where my brain is.
I guess all the drug abuse
Isn't a real attempt
Now is it?

The one dollar bills smell different
Race to the middle

Movers moving
Continuum
City of broken glass
Continuum
Track Name: Fate
You tell me
Honesty
Is it the best policy?
The jury is still out.
I cut the judge off at "Be seated"

Don't let the truth change anything.
Turn and walk away.
Because I don't believe in fate
Mascara stained pillowcase

The sun went dim
So we turned to a backup source

Bandcamp Daily  your guide to the world of Bandcamp

Guests include Kassa Overall and Muriel Grossman, plus an LP of the week by Van Hunt.